Necessary
These cookies are essential for the operation of the site.
Statistic
To further improve our offer and our website, we collect anonymous data for statistics and analysis. Using these cookies, we can, for example, determine the number of visitors and the effect of certain pages on our website and optimize our content. In addition, these cookies are used to show you personalized content that suits your interests.
Home » News » Technological advance in pipe rehabilitation

The conservation association Reinhalteverband Donautal, which is represented by Linz AG Waste Water, operates a 5200 m sewage pressure line between Wilhering and Linz. Severe corrosion in the old pipe and resultant leaks have made renovation of this DN 400 pressure line in necessary. The RHV opted for trenchless installation, because the line lies in the vicinity of the B129 Eferding main road and it wanted to keep traffic disruption caused by the work to a minimum. In the end, renovation of the old pipe using PE pipes deformed on-site was put out to tender. The contract was awarded to RTi-Austria GmbH, a specialist in trenchless rehabilitation processes. It used the AGRU Close-Fit liner made of PE 100-RC for the renovation. This pressure-resistant liner is designed for relining without an annular gap and can, thanks to its extremely small bending radii, be pulled in through existing shafts or small trenches.

In the area concerned, just a few metres separate the B129 and the Danube, which run parallel to each other. The sewer in need of repair lies directly behind the crash barrier. Due to the extensive work to reduce the width of the road that would have been necessary, relaying the 5.2 km section using the cut-and-cover method would have resulted in severe disruption to traffic. In order to hold up traffic as little as possible, the Reinhaltungsverband Donautal opted for trenchless rehabilitation of the ductile cast pipe system (GGG DN 400 mm) using the PE 100-RC close-fit method. The rehabilitation work started in June 2017 and is scheduled to be completed in October 2017. The renovated pipe system must be able to withstand an operating pressure of 3 bar thereafter.

The open invitation for bids stipulated shaping of the PE pipes on-site. Due to the very long lengths involved (up to 620 m), the association wanted the PE liners to be deformed on-site. The close-fit liners are usually folded at the factory, meaning this project placed new demands on this rehabilitation system. RTi Austria, a civil engineering company located in Altenberg bei Linz that specialises in pipe renovation, won the contract as the best bidder. RTi uses AGRU’s close-fit liner for its pressure pipe renovations, which for this project is made of PE 100-RC. This material is resistant to point loads and stress fractures. The close-fit liner is a folded pipe that is easy to pull into an old pipe in need of repair because of its reduced cross section. The folded close-fit liner’s “memory effect” enables it to reshape itself into a circular pipe after installation using pressure and temperature. This causes the liner to lie tight against the old pipe (close-fit) and form a frictional connection with it. This method allows the greatest possible internal cross section to be retained in the old pipe and an annular gap to be avoided completely. The surface of the AGRU close-fit liner remains smooth throughout its service life, thereby improving the flow properties of the sewerage line. A pipeline renovated in this way has the same quality as a new pipe, with a comparable lifetime of several decades. There is no longer any change of root intrusion, corrosion, abrasion or deposits in such a renovated pipe system.

The 18 m close-fit liner pipe sections (OD 400 mm, SDR 26) supplied by AGRU are connected into pipe strings of between 440 m and 624 m in length at the installation site using heated element butt welding. These correspond to the draw-in lengths stipulated in the invitation for bids. Normally, AGRU delivers close-fit liners to the installation site folded and wound up on reels. Due to the unusual draw-in lengths in this particular case, however, the liner’s cross section has to be shaped into a U on-site. AGRU therefore equipped the site crew with an AGRU deformation unit including two caterpillar haul-offs. To deform the liner, RTi first pulls the welded pipe strings through a heating section specially developed for this installation site to heat the pipe to about 80 °C. Immediately after the heating section, the pipe string is passed through the AGRU deformation unit. This deforms the circular pipe axially into a U-shape, reducing the cross section by 15% in the process. To ensure the desired U-shape is retained after the cooling process, the freshly folded pipe is immediately fixed with straps.

A pig in the pipe

A further challenge at this installation site is to maintain sewerage operation. To this end, a temporary pressure pipeline is installed. For this, the site crew welds together PE pipes (OD 225 mm, SDR 26) supplied by AGRU to form a 1800 m PE pipeline above ground.  It drains the waste water from three draw-in lengths at a time during the work and is then moved on once these sections have been renovated. In the next step, the previously drained sewer sections are cleaned. To do this, a pig with attached brush rims is pressed through the pipe as a cleaning and inspection device. The second time the pig is pushed through is carried out purely with compressed air in order to remove any water still in the pipe.

U returns to O

In order to pull in the new U-shaped pipe string, RTi uses the high flexibility of the AGRU close-fit liner, which permits even the smallest of bending radii. Using the traction head welded onto the pipe string, a winch pulls the individual pipe strings into the cleaned sewer sections. RTi then pressurises every pipe string with steam heated to 120°C. As a result, the folded close-fit liner is restored to its original circular shape. Since the outer diameter of the liner corresponds to the internal diameter of the old pipe exactly, the new pipe clings to the internal wall of the cast pipe like a second skin.

Thomas Peyrl, RTi’s Regional Manager North, is supervising this remarkable installation site and said: “The technical challenge was immense. Deforming pipe strings more than 600 m long on-site was also something new for us. AGRU has supported us exceptionally well with good technical advice and its deformation unit. We have deformed the pipe strings at the construction site without any problems, are hardly affecting traffic on the road at all and are optimistic that we will be able to keep to the ambitious schedule.” 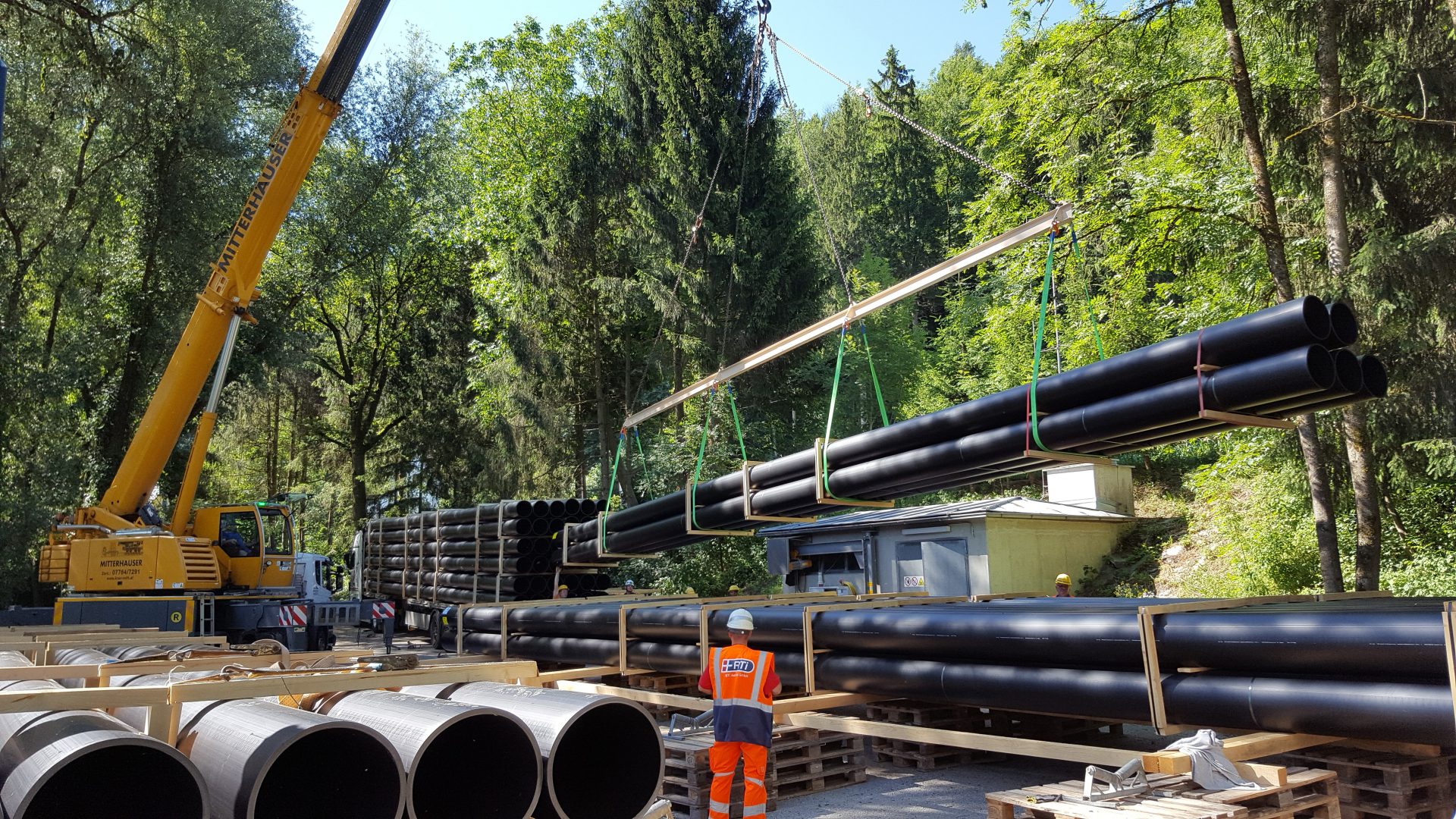 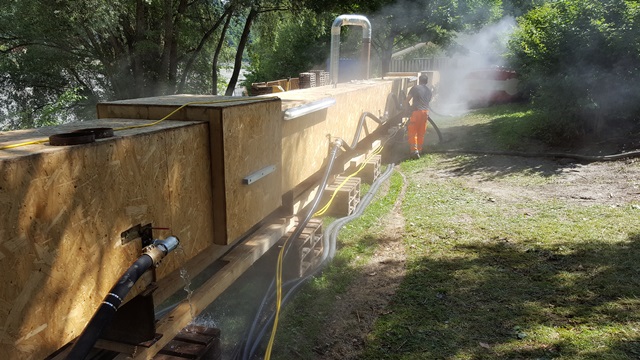 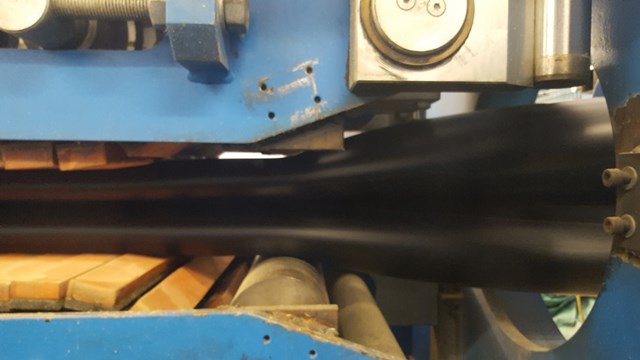 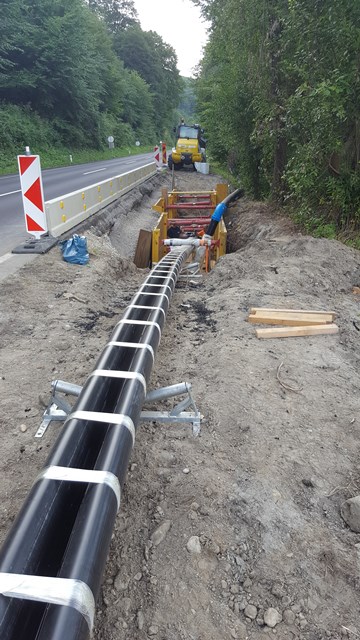 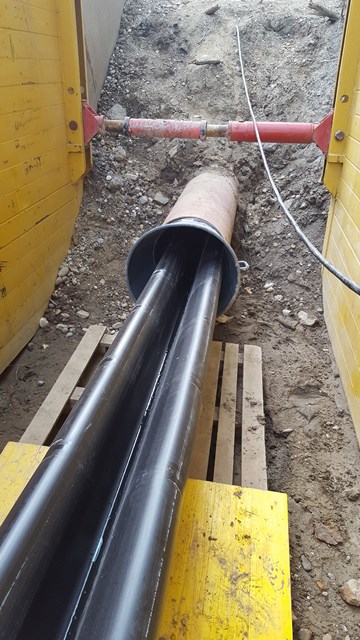